How can you tell a company picnic is a success for everyone?  Just ask the kids! 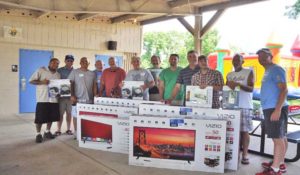 Recently, we had our annual company picnic. The amazing part is I think my kids look forward to it as much as we do! Life is full of phases and as you know my kids are hitting their late teen years and will be attending high school and college when most of the time they just want to do their own thing. Our youngest starts high school this year.

The irony is all three not only attended the company picnic but actually looked forward to it! They get to hang out with the kids they see every year and it really is amazing how many have grown up attending the Straub picnic. When the picnics began, they were the little ones.  Now, they are the older ones showing the way.

This year, we had our usual food and fun. Burgers, dogs, chicken, bouncy house, face painting, an ice cream truck and of course the auction!  The auction has become the highlight of our company picnic. There were 12 gifts raffled, including 5 big screen smart TVs and a number of bluetooth speakers and toys!

There are only two prerequisites to win something, be at Straub for 6 months and attend the picnic! Now to be fair, if you’ve won a “big” prize the year before, you weren’t eligible for a big one this year. In addition, if you just attend the picnic, you go home with some cold hard cash! How cool is that!

Every year we say the same thing, “this year was the best ever!” And it was!

The fun, fellowship and weather was by far the best we’ve had. It’s always so nice to get together as a “Straub Family” to hang out, and it’s a great reminder of what a special place we all have at Straub Construction.

Next year’s picnic is just 12 months away…  We can’t wait! 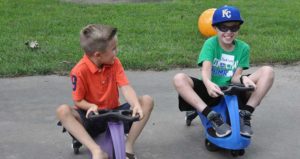 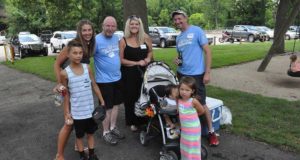 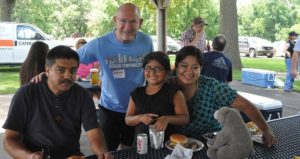 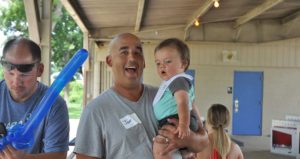 On a Saturday night a few weeks ago, my daughter, Rebekah, called me during her shift at Knub’s Pub in Shawnee. She sounded concerned. A homeless woman had come into the restaurant, and Rebekah wanted me to meet her.

“What do you want me to do?” I asked, wondering what good it would do for me to drive out there.

“I just want you to meet her,” Rebekah said.

It turns out that meeting a homeless person was exactly what I needed.

My first reaction was to see what kind of resources I could find to help this woman. I made some calls, and it only took me about fifteen to twenty minutes to discover that there’s not a lot out there for in-taking homeless people in Johnson County at 7:30 p.m. on a Saturday night.

Rebekah called me again—this time she was crying. This woman, we’ll call her Amanda (that’s not her real name), had asked Rebekah if they could pray together, and in her prayer, Amanda thanked God for being able to sit in a place with air conditioning. Rebekah was blown away by Amanda’s gratefulness.

“She has nothing materially, but she has more faith than many people who have everything,” Rebekah said.

Rebekah was determined to find Amanda a place to stay for the night, and she insisted again that I come help. So I got in the car and headed to Knub’s Pub. When I walked in, I saw Amanda sitting at a booth. She’s in her mid- to late-30s, and she’s petite with blonde hair. She was wearing a filthy white shirt, and her jeans looked like they were ten sizes too big. The tattered bottoms were rolled multiple times and caked in dirt.

I introduced myself and sat down. She didn’t have anything with her except the food Rebekah and her coworkers had bought for her, and she was very timid and shy at first. When I asked her how she got there, she said that she walked . . . from Lawrence. I was shocked. She’d walked from Lawrence to Shawnee in the summer heat? But judging by her sunburn and the bug bites on her arms, I believed her.

By this point, I was resolved that if we couldn’t find Amanda a place to stay for the night, she was going to stay at our home.

It was loud inside the restaurant, so we went outside to continue talking. Through our conversations, it became apparent that Amanda deals with some mental health issues; however, she kept surprising me. She is very observant and intelligent. When I asked her what she likes to do, she told me that she wants to get a canoe so she can explore the river. She has real interests and dreams and aspirations just like anyone else.

I called Susan and asked her to come join us. When she got there, Amanda instantly stood up and pulled out her chair for Susan to sit down. Her instinctive servant’s attitude was humbling.

Then she looked at Susan and said, “Well, I guess it’s like talking to the prodigal son.”

Susan simply replied, “I don’t know anything about you. I just want to see if we can help.”

The exchange struck me. My family and I aren’t strangers to helping people in need. We’ve served with Catholic Charities, St. Mary’s Soup Kitchen, the Bishop Sullivan Center, and other ministries on a regular basis for years now, and Rebekah recently took a missions trip to Jamaica where she experienced extreme poverty and the harsh realities of mental and physical disabilities.

Yet, meeting Amanda was probably the first time that the three of us had spent extended time with a homeless person. Before then, the longest interaction I’d had with a homeless person was in passing as I put food on his or her tray. It was a real wake-up call for us and a powerful way to break the many stereotypes that come with poverty and homelessness.

As Susan pointed out later, “You don’t know the shoes they’ve walked in and what they’ve been through. Somewhere along the line something has happened to them, and you don’t know what.”

Susan took Amanda to Walmart to find her some new jeans, T-shirts, and hiking boots, and I headed home to get a room ready. By this point I assumed Amanda was going to spend the night with us. It was 9:25 p.m., I was out of luck finding anywhere for her to go. To my surprise, when Amanda and Susan got back to the house, Amanda said she wanted to go back to the homeless shelter in Lawrence, but she had to be there by 10.  The surprise was, Amanda was more comfortable going back to the shelter than staying in what would be like a five star hotel.

So we got in the car and headed off to Lawrence. Amanda knew where to go and pointed us in the right direction. When we got there, we said our goodbyes without much fanfare and went our separate ways.

More to Be Done 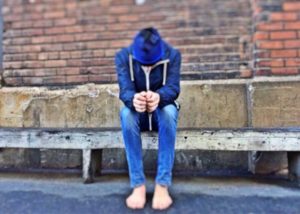 That night made a big impact on me, and it was an incredible eye-opener of the need in my own backyard. Homeless exists, yes, even in Johnson County. Susan’s and my frustration in this whole experience was that we didn’t know where to turn to help someone who needs a place to stay in our neck of the woods. There are some great resources out there, and I’m so thankful for each organization in our city that’s doing its best to serve the poor and the homeless. But I’m now very aware that there are serious holes in our system.

There is definitely more to be done.

I’ll be the first to admit that I’ve blown past many homeless people in downtown KC, assuming that they will use any change I can spare to support bad habits. But after meeting Amanda, I’m realizing that I just don’t know. Amanda’s story made me a lot more aware of the depth of mental illness, loneliness, and how hard life must be when you’re on the outside in so many senses of the word. Spending time with her has made me more open-minded and more eager to stop and hear people’s stories.

Rebekah didn’t expect to encounter that kind of need at her job in Shawnee, but the need is real, and your opportunity to make a difference is real too.

Just like Amanda, each homeless person has a story. Are you willing to find out what it is?

I want to give a huge thanks to the management and employees at Knub’s Pub. Thank you for welcoming Amanda into your restaurant, treating her with respect, getting her something to eat, and letting her enjoy the AC.

I also want to thank the people who took my calls that Saturday night. Here are a few of the organizations that are doing great things to meet needs in our city: