Dan VanDonge, senior project manager at Straub Construction, has been honored as one of this year’s award recipients!
In 2005, Parker Young was the first Straub employee to be named into this esteemed group.

After graduating from Kansas State University with a bachelor’s degree in Construction Science and Management in 2001, Dan spent more than two years refining his skills as a field engineer before coming to work at Straub Construction.

Dan joined our team in June of 2004, as a Field Superintendent at Schutte Lumber. This was the first of many jobs that Dan would oversee in his Straub career. It wasn’t long before Straub Construction saw great potential in Dan and promoted him to a Project Manager after less than a year.

Dan continued to impress with his attention to detail and his interest in improving processes between construction teams. These qualities did not go unnoticed, and after less than three years Dan was then promoted to Senior Project Manager. As project manager, Dan was instrumental in implementing a cloud based management system in order to better connect the teams on the ground, subcontractors, architects, and owners.

Dan said, “I was responsible for implementing and, most importantly, training our employees how to hit the ground running,” and this has resulted in meeting project deadlines, financial budgets, and increasing project communication lines.

Please help us congratulate Dan for winning the Ingram’s 40 Under Forty award… we’re proud to have him on our team!

“Goodness is about character – integrity, honesty, kindness, generosity, moral courage, and the like. More than anything else, it is about how we treat other people.”
– Dennis Prager

All of us through our life experiences come across people that we admire, look for guidance and try to emulate in living our lives. I have been molded by many fine mentors.

There are four that have had a big impact on forming my core values. I admired each for their strong character and the core values they lived their lives by, faith, family, charity and work ethic.

My dad has been my role model from day one, and shaped who I am today. I grew up watching his commitment to our family and the strong work ethic he had each day. I admired his servant heart and strong faith more than words can say.

I’ve also always looked up to Robert E. Miller. He founded the Miller Group in 1961 and my Dad was one of his first customers. Bob Miller is what they call ”Real People”, dedicating the last 16 years of his life to charity, says it all. He truly gave sacrificially without regret.

Another leader I had deep respect for was Byron Thompson, chairman of Country Club Bank in Kansas City. This successful man left a legacy in our community, not only for his business acumen but also for his humility and personable approach to everything. His legacy continues with his families’ many charitable works. 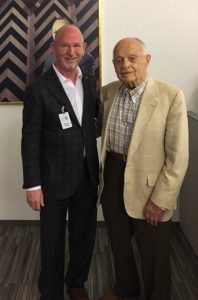 Bill Dunn Sr. is the fourth person on my list of mentors. Former CEO and Chairman Emeritus of the well-known company, JE Dunn Construction. Mr. Dunn Sr. helped shaped this successful business that today is known around the country. His pursuit of integrity and excellence is reflected in how JE Dunn Construction operates.

Each of those men, in their own way, has deeply impacted the Kansas City area by living out their core beliefs. I think the greatest step towards wisdom is to place yourself close to people such as these. I’d take any opportunity I could to visit and glean words of wisdom from them when I’d cross paths at work events or charity dinners.

Those conversations and encounters are not as common these days. When my Dad passed in December, Bill Dunn became the only remaining man in that core group of mentors.

So at a recent charity event earlier this year, as always, I made it a point to see Bill and Jean Dunn.  Always so open and inviting, conversation with Mr. Dunn was positive and informative. At the end of our conversation, he invited me to his office for lunch.

Beyond excited, I made a call to his assistant the very next day to get it scheduled. And we set the date for March 14th.

Being a third generation construction family, I’ve had several opportunities to interact with Mr. Dunn, but I’d never had the chance to sit down and have such an in-depth conversation with this giant in the construction industry.

We met in a conference room for over an hour. The time went ever so quickly as Mr. Dunn went from one story to another without missing a fact. I was fascinated to hear the firsthand account of part of his life. 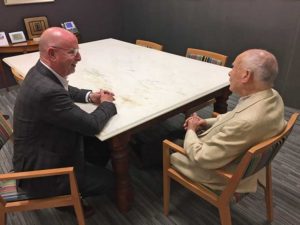 He spoke about growing up in Kansas City, and the many great teams he played on in high school and college. Turns out he was quite the star on both the baseball and football field!  I learned so many things I didn’t know about his life and was amazed by his keen intellect, retention of names, facts and dates of the events in the 1940’s through current events.

He also shared about his start in the family business. He was especially proud of the work they did during World War II and how JE Dunn (his dad) would not make a profit on the government work during the war. I could see how his determination, hard work and success he had as an athlete, continued into his career and into the successful business JE Dunn Construction is today.

I came away even more impressed and thankful for the opportunity I have had to watch, admire and be influenced by such a gracious leader.  Thank you Bill Dunn Sr. for your leadership and great legacy.  I am looking forward to our next lunch! 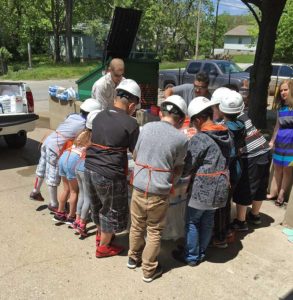 On a beautiful day in May, we had the opportunity to participate in a career day at Noble Prentis Elementary School.  The task was to create a fun activity to get kids interested in the construction industry. We worked with eight to fifteen 3rd-5th graders at a time in six, 12-minute rotations. Each child got to put concrete into a 8” pan and decorate their creation with marbles and buttons.

With only 12 minutes, the kids and adults had to work as a team to get through the task. The challenge was also increased by the concrete chosen because it only had a working time of 5 minutes. This was by design so that the kids would be able to finish their work and see the process from beginning to end.

Most of the kids were eager, ready to dig in and move the concrete around. There were also a few that were a bit timid at first, but once they got into it there was no stopping them. The concrete started to set quickly, so the kids had to work quickly. They learned that with a little water they could do “touch ups” on their construction project to achieve the finish they wanted as it was getting harder. 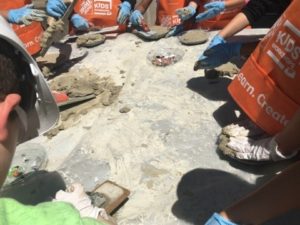 This activity captured the attention of the teachers too! It was a hit for most of the students and the word spread quickly that there was a fun activity outside. When one of the other presenters had to leave unexpectedly, the students were allowed to pick where they wanted to go. Most of the students chose our table.

The experience continued the next day as they removed the concrete from the mold to see the results of their construction project.

The day was filled with great learning experiences.

The children got to play with concrete and learn how quickly it sets up. They got hands on experience with concrete tools. They were able to touch the concrete when it was wet and dry as well as experiencing the heat that concrete puts off. Our hope is that we planted the seed for some future skilled craftsman. 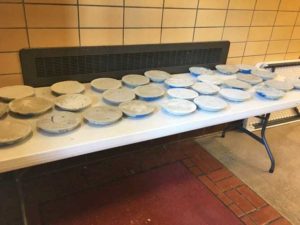 The teachers that stopped by our presentation liked the creativity and teachable moments from this project. One teacher even offered to pour concrete for Straub this summer! The teachers appreciated the idea that college isn’t required for everyone. You can be successful in the construction industry if college is not for you. We also talked to the counselors about doing more demonstrations on a wider range of topics in the life of a general contractor, much like the “bring your kids to work day” projects Straub has had.

In the end, Mario Gutierrez, Montyle Price and David Baalmann had a great time interacting with the kids. We want to give a big thanks to Noble Prentis Elementary School for allowing us to share our enthusiasm for construction with their students.