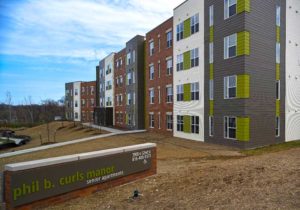 On March 21, 2017, the ribbon was cut on the recently completed Phil B. Curls Manor senior living development. Located at 5150 Mersington Avenue in Kansas City, Missouri, this 54-unit facility was developed by Brinshore Development, and named after Phil B. Curls, a longtime Kansas City civic leader who served in the Missouri General Assembly for more than 25 years.

This new, four-story, 59,000sf facility offers 54 beautiful, spacious apartments providing great views of Brush Creek and the surrounding area. It was constructed with many energy efficient features and provides a community room with a lounge and kitchenette, theater, fitness room, computer lab, off- street parking as well as outside spaces for walking and relaxing. 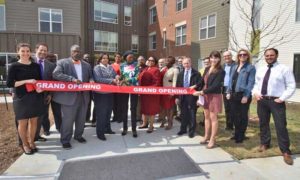 Kansas City Mayor, Sly James, addressed the large crowd attending and congratulated the development team on a quality addition to the city.

Curls Manor is adjacent to Cleveland Heights townhomes and across the street from Pemberton Park for Grandfamilies, both projects that have been completed by Straub Construction.

David Baalmann and Jason Riordan teamed up as Superintendent and Project Manager for Straub and did an outstanding job. Many in attendance commented on the great experience they had working with David and Jason and the importance of having the right contractor building your project.

“Working with David was a wonderful experience because it felt like he was ahead of the game and that it was a true Owner/Architect/Contractor team. David always came to the table with possible solutions when issues arose and there was a level of trust developed with both Jason and David due to their abilities and willingness to make the project the best it can be.” 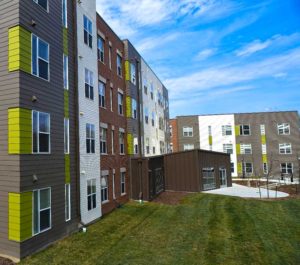 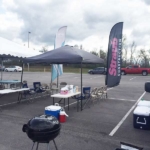